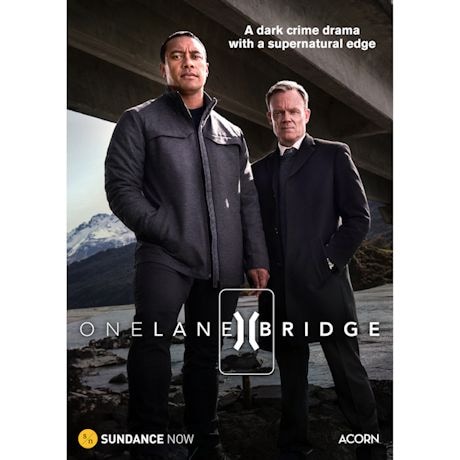 $39.99
Share Me:
add to wish list
Overview
A small town in New Zealand is upended when a local man's body is found at the bottom of a one lane bridge that's long been a focus of unexplained events. Newly arrived to the Queenstown area, Maori detective Ariki Davis (Dominic Ona-Ariki, The Commons) investigates the death. Ariki starts having strange visions near the bridge, reawakening a gift that endangers his life but may help solve the mystery of the sinister landmark. 6 episodes, 4 ½ hours, 2 DVDs.
Episodes
Episode 1: Arrival
Ambitious young detective Ariki Davis arrives in Queenstown determined to impress his boss, DSS Stephen Tremaine. But as a Cook Island M?ori from Auckland, he sticks out like a sore thumb in the small town. When a much-loved farmer turns up dead at the bottom of One Lane Bridge, tensions quickly escalate between Ariki and Stephen as the investigation becomes rife with conflicts of interest.

Episode 2: Denial
Stephen's initial suicide theory is upgraded to a homicide investigation as motives and suspects surface. The Ryder family implode under the strain of mourning their loved one, and unsettling truths come to light. Mysterious signs start to haunt Ariki, who struggles to interpret what they mean, both for him and for the case.

Episode 3: Escape
The community come together to bury the dead. Ariki's suspicions grow that Stephen's wheelchair-bound wife, Lois, is somehow involved in the case. When Ariki gets an alarming visitation, he distracts himself with a hedonistic bender. Frustrated with the investigation's lack of progress, the locals deal out some vigilante justice of their own.

Episode 4: Fall
The homicide investigation ramps up. Stephen is put under pressure when Lois is brought in for official questioning. Ariki's inappropriate behavior jeopardizes both his professional career and the case. Stood down from work, he finds himself lost in the wilderness. Meanwhile, One Lane Bridge tries to claim another victim.

Episode 5: Acceptance
Ariki's heroics are rewarded when he's reinstated at work. The Ryders celebrate 100 years on the farm, but the festivities are cut short when the guest of honor goes missing. When an important deal is reneged on, it fuels a bitter animosity. A poignant confession provides much-needed closure for the town, and Ariki bites off more than he can chew.

Episode 6: Answers
A startling revelation at One Lane Bridge puts Ariki in a deeply compromised position. The locals take their personal vendettas out during an isolated rabbit hunt. Ariki's gift helps him solve the final piece of the puzzle. The ongoing tension between Ariki and Stephen builds to a deadly climax.