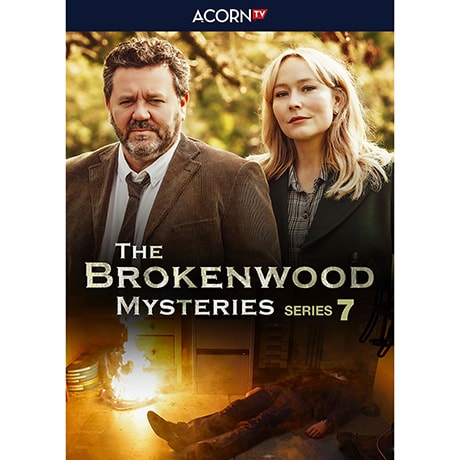 $59.99
Share Me:
add to wish list
Overview
Detectives Mike Shepherd (Neill Rea) and Kristin Sims (Fern Sutherland) return to uncover more macabre goings on in the quiet, picturesque, murder-ridden town of Brokenwood. In Series 7, they investigate the murder of an antiques show host, a death at a health retreat, a deadly bank robbery, a killing at a farmer's market, a fatal fire at a historic cinema, and 1970s-themed party that turns lethal. "New Zealand's tongue-in-cheek answer to Midsomer Murders" (The New Zealand Herald). 6 episodes, 3 DVD or blu-ray discs. SDH. Mature content.
Episodes
Episode 1: The Garotte and the Vinklebraun
When a TV crew from the hit series All Things Old and Beautiful arrives in town, the citizens of Brokenwood excitedly bring out their antiques to have them evaluated on camera. The next morning, the show's superstar host ends up murdered by an item he purchased the day before.

Episode 2: The Witches of Brokenwood
The Brokenwood Health Retreat suffers a massive PR problem when a spa guest dies in the steam room. While investigating the tricky case, Mike and his team encounter family feuds, spiritual rituals, and a missing ring.

Episode 3: Dog Day Morning
When four masked men attempt to rob the Brokenwood Savings Bank, it's up to Mike to determine which one of them pulled the trigger and killed the bank manager. With Breen gone, new guy DC Daniel Chalmers gets a crash course in the town's idiosyncrasies.

Episode 4: Something Nasty at the Market
Kristin takes Mike to the local farmers market, but it becomes a crime scene when the owner staggers into the crowd with a pitchfork embedded in her back. The cause of death seems obvious—until Gina uncovers something shocking while performing the autopsy.

Episode 5: Exposed to the Light
A fundraising evening at the historic Brokenwood Empire Cinema turns deadly when a fire breaks out, and when the smoke clears, a local businessman is found strangled with film.

Episode 6: Here's to you, Mrs Robinson
The morning after a 1970s-themed party, the host is found dead in the hot tub. When Mike mysteriously leaves Brokenwood without telling the team where he's going, Kristin is left to lead the investigation.