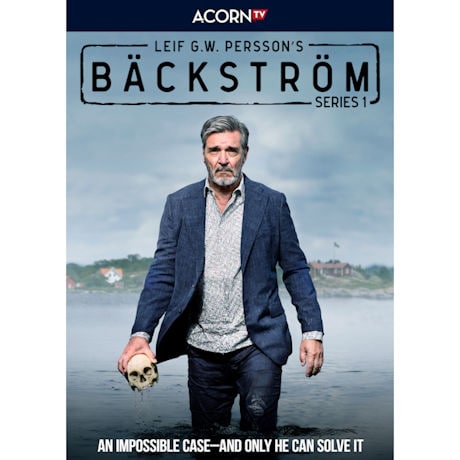 $39.99
Share Me:
add to wish list
Overview
Detective Evert Bäckström (Kjell Bergqvist, Spring Tide) is a rock star among cops, and starring as an expert on TV doesn't help his ego or reputation. He disdains bureaucracy, his colleagues, and fellow human beings in general, convinced of his own genius—and he is one, at solving crimes. But Bäckström sees a case only he can solve: a woman who has died twice. 6 episodes, 5 hrs, 2 DVDs. Swedish with English subtitles.
Episodes
Episode 1: Homicide detective Evert Bäckström is visited by his young neighbor, Edvin, who's found a woman's skull with a bullet hole on a remote island. Bäckström opens a murder investigation, but his superior doesn't give him the resources he's used to, and the Chief Prosecutor tries to take over his case.

Episode 2: A murder victim seems to have died twice, both on a distant island and many years earlier in the 2004 tsunami in Thailand. Bäckström wants to interrogate the widower, but Prosecutor Hwass puts a stop to it, as it can't possibly have been Jaidee found on the island. The investigative team doubt Bäckström as well, but he doesn't give up and continues to follow his leads - behind Hwass' back.

Episode 3: Bäckström travels to Thailand to dig for clues around Jaidee's life and death. In Stockholm, the team follows up on another lead: missing Asian woman Mi Mi. Everything points to Jaidee having died in the tsunami, and soon Mi Mi's husband is arrested. Bäckström starts to doubt himself, until he follows the footsteps of Jaidee and Daniel and perhaps begins to uncover what might have happened.

Episode 4: Bäckström has a theory about what might have happened to Jaidee, but the team is skeptical and he can't prove anything yet. Meanwhile there is suspicion that someone on the force is giving information to a criminal gang. Fingers begin to point at Bäckström, and Hwass receives support in her quest to get him fired. New details emerge about the case, and young neighbor Edvin finds a suspect.

Episode 5: Bäckström has been suspended but can't stop himself from helping the homicide investigation, now with Edvin in tow. Together they go to Edvin's scout campgrounds to confront one man who's been linked to both Jaidee and the location where her body was hidden. Revelations uncover Bäckström's.

Episode 6: Bäckström is struggling with the feeling of having been betrayed by someone close to him, but keeps a stiff upper lip and is put back into service. Important questions are still to be answered. Who killed Jaidee? And why? And if it is possible to die twice, does that mean that one can live twice as well?